The LAMOSO (LAsar/MOtion/SOund) is a MIDI controller; that is, it's a device that sends MIDI to my computer. MIDI is a standard music protocol that allows electronic musical instruments (e.g., the LAMOSO) and computers to communicate with each other. It's not audio - it's digital data that includes values for pitch, length, volume, etc.

So... the LAMOSO uses lasers and photogates to send signals to my computer, which then turns that data into sound.

The lasers hit (or don't hit) photogates. The photogates connect to a Teensy++, a "microcontroller development system" (it's the computer chip thingy in the pictures), and that sends my computer data about whether there is or is not a laser beam light hitting the photogate. Then I use Max, a music programming language, to interpret that data into music.

Visually and musically, what this means is that there's lasers crisscrossing an area, and when those lasers are broken, it changes the music.

The LAMOSO was first used by dancer Danielle Ross at Ten Tiny Dances/23 at the bluehour (Portland OR) in May of 2012. That version used 4 lasers and a Roland drum machine in place of the Teensy++. We performed that piece a second time in Sept 2011 at the Time Based Art Festival at Ten Tiny Dances/25. That version used 8 lasers and the Teensy ++. A modified version of the instrument was used at the Electrogals Festival 2011: Gals Gone Wired for a new piece. That version of the LAMOSO used very short distances, light instead of lasers, and the piece was performed without a dancer. The LAMOSO was also invited to compete in the 2012 Guthman Musical Instrument Awards, held in Atlanta GA.

Some other notes about this:

Any laser would work, but I use green laser pointers because you can see the beam of the laser and not just the point where the light hits.

The photogates are made by Vernier Software and Technology, a company that makes equipment for science classrooms. I've modified them to connect to the Teensy++; they are built to connect to data collection interface called a LabQuest. There's other photogates out there - garage door openers, for example.

Special thanks to Danielle Ross, the dancer who's been performing with the LAMOSO, Gene Kunze who, in addition to giving generally good advice about performances, also wired up the lasers to switches; to Matthew Denton for supplying the photogates and photogate advice; to Jesse Mejia for helping to code the Teensy++; to Heather Perkins for lending me her Roland drum machine that allowed me to create the original version; Sara Murray, for coming up the the name; and, to Mike Barber, the creator of Ten Tiny Dances. 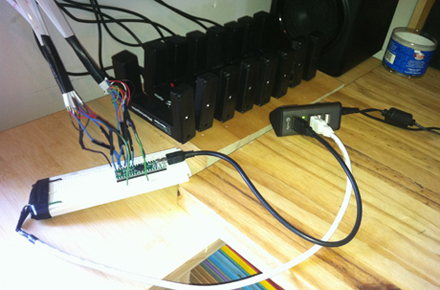 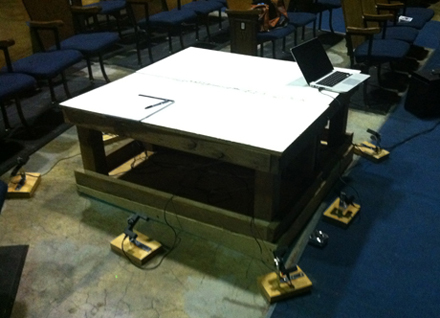 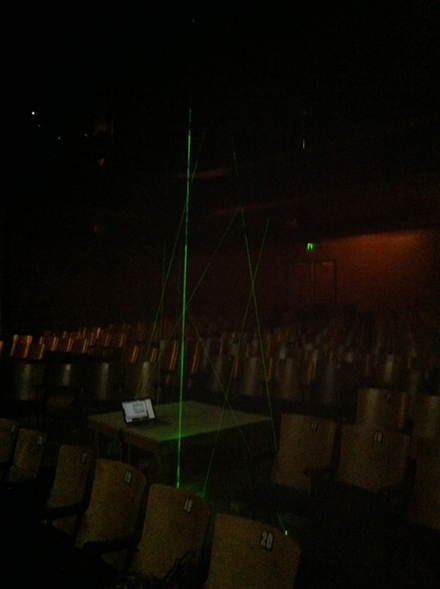 de/construction at The 2011 Time Base Art festival