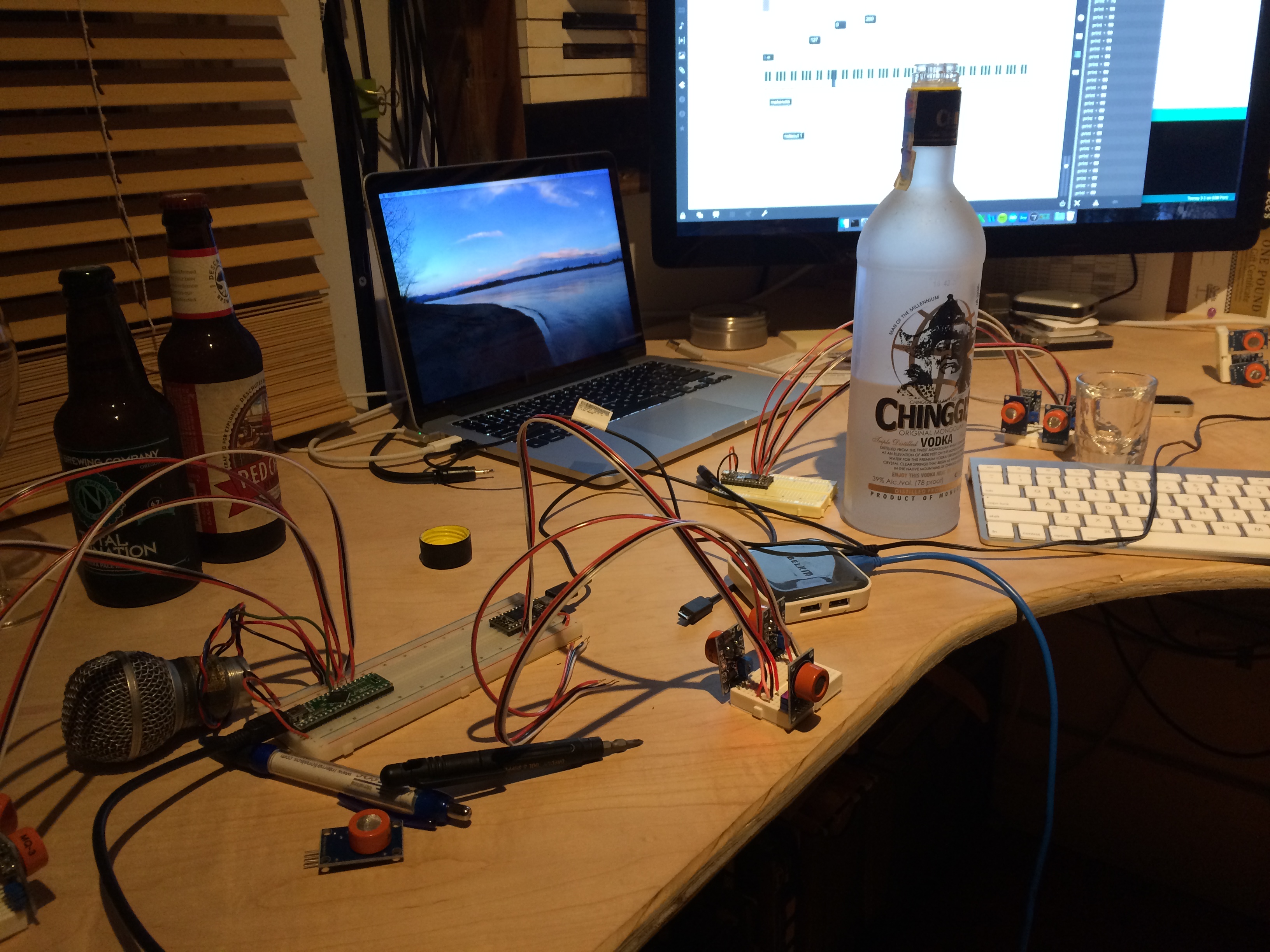 "I have taken more good from alcohol than alcohol has taken from me." - Winston Churchill

ethanolOrchestra is an orchestra / sound installation of alcohol sensors. It's playable by people who are (or aren't) drinking - a soundscape is modified by the blood alcohol content of people breathing in to breathalyzers. ethanolOrchestra is built with alcohol gas sensors and teensys, using parts and electronics from local Portland area stores Surplus Gizmos and URS Electronics.

Based in Portland, Oregon, Electrogals is obsessed with electronic music and digital art by women. We like to call it sound art. Our goal is to ignite awareness of this electronic and experimental art form and inspire you by sharing alternative performance and sound styles by a variety of Electrogals. Along the way, we hope to spark your individual sound creativity and give you ideas for creating some of your own.

The LAMOSO (LAsar/MOtion/SOund) is a MIDI controller; that is, it's a device that sends MIDI to my computer. MIDI is a standard music protocol that allows electronic musical instruments (e.g., the LAMOSO) and computers to communicate with each other. It's not audio - it's digital data that includes values for pitch, length, volume, etc.

Meduse is a film by Christi Denton with a soundtrack by Christ Denton and Heather Perkins.

To Serve is a film by Kavita Bali with a soundtrack by Christi Denton. It was first performed at the 2011 Electrogals Festival.

merge is a film by Gene Kunze and Christi Denton with a soundtrack by Christ Denton. It's been featured on flasher.com, and was in the 2008 Spark Festival. The scenes are assembled from individual pictures that have been taken anywhere from 1 second (the protest) to 6 seconds (the avenue) apart. The film was shot in Paris, and includes a protest by teachers' unions, the Seine River as photographed from the roof of the L'Institut du Monde Arabe (the Arab World Institute), the busy avenue rue Monge over the course of a day, the popular wine bar Le Baron Rouge, and a Sunday morning at the Arenes de Lutece (Lutece Arena).

The sounds in this piece are the sounds of glasses (wine glasses and water glasses) and a satar (settar), a 1 stringed Iranian instrument with 12 drone strings.

The History of Musical Temperament and Pitch Before 1750 (written 1996)

The Women's Philharmonic: History, Music, and a Sociological Analysis. (Written in 1995 by Christi Denton, Amy Bohorquez, and Katrina Blomdahl)